“I have climbed highest mountain / I have run through the fields / Only to be with you”
“I still Haven’t Found What I’m Looking For”, U2

For years I have contemplated what I still see as one of the greatest three-song sequences on any rock album: the first three songs on U2’s 1987 release The Joshua Tree (“Where the Streets Have No Name”; “I Still Haven’t Found What I’m Looking For”; and “With or Without You”). Love them or hate them (and I suspect once most of us get past any U2 antipathy created by the last decade there will be more love), these songs are immediately recognizable and eminently successful. 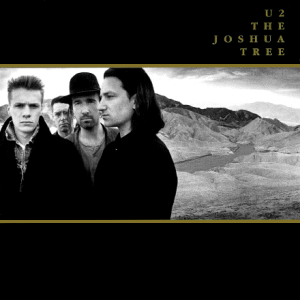 (The other great three-song sequence is from the Pixies’ Surfer Rosa. I’ll be happy to hear some other candidates. As an aside The Joshua Tree is an underrated lovemaking album; slow, gentle and melodic, it was always useful for creating a relaxing atmosphere…)

What I have contemplated is what makes these songs successful. It is true that the instrumentation is iconoclastic—the Edge’s guitar is unlike anything else at the time; the rhythm section creates a driving beat that is moving but not subsuming; Brian Eno’s production choices are almost otherworldly. Bono’s vocals are at their best—he is not the most technically brilliant singer, but his voice is like a force of nature,: when it works, it is beautiful and unrivaled.

But these elements aren’t sufficient for the latter half of the album where the political “Two Americas” theme is most prominent. (The songs tend to lose musical structure even as the lyrical content gets more specific.) Instead, what makes these early melodies and their instrumentation successful, I suspect, are the lyrics.

Like most of the songs I end up liking (think of selections from They Might Be Giants and the Pixies), the lyrics on these three songs refuse disambiguation. But, unlike some of the nonsense-at-first-glance that you find with those other bands, U2’s opening three songs seem to make sense almost readily. What I mean by this is that each song presents a narrative with only a few details needed to be supplied.

William Empson, a literary critic, famously identified Seven Types of Ambiguity and in doing so claimed ambiguity as an essential characteristic of literature (and, by extension, all art). Empson’s ambiguity is where different interpretations of a phrase or text can be made without willfully misreading it. Such moments constitute a type of puzzle that indicates conflicts within the work’s creator.

Empson’s focus on the ‘puzzle’ and the ‘conflict’ should rightly be expanded to the audience (since I don’t think we can ever know anything about the author’s mind at all). Ambiguity is an effective artistic device because it invites the audience to participate in the creation of meaning; it embraces the mind of the listener/reader and allows for the perpetual re-creation of meaning.

(As an aside, I think that this sense of ambiguity is what makes the emotional tone of U2 not “Emo”, to continue an earlier discussion. Emo tends to be over-contextualized; it prizes the experience of the artist and the evocation of the particular over the universal. This is not, however, altogether alienating—particular and specific moments can elicit identification from listeners too, see our posts on Wilco’s “Passenger Side”).

U2’s ambiguous lyrics in these first three songs are especially effective because they tap into two universals: faith and romantic love. In each song there is a tension (felt by critics as well) regarding  central meanings—“Where the Streets Have No Name” seems to introduce the themes that will dominate the first part of this album. It starts with a heart-felt protest (“I wanna run, I want to hide / I wanna tear down the walls / that hold me inside”).

Such protest, however, is only provisional—it occurs in a nameless place with nameless streets—in a no-place where these actions will never happen. This personal protest slowly develops, however, when, after the chorus, Bono shifts to the first-person plural, a ‘we’ that turns out to be problematic as he turns to address the ‘you’  (“We’re still building, then burning down love / burning down love, and when I go there / I go there with you, it’s all I can do”). The song continues to lament the breakdown of some type of relationship (“our love turns to rust”) but it is never clear what kind of love this is.

The uncertainty expands in the second song: “I still Haven’t Found What I’m Looking For” starts out by sounding like a paean to a failed romance. The “You” of the first verse could be a love interest, but by the final verses it seems clear that the song is about faith (“I believe in the kingdom come…You broke the bonds and you / loosed the chains / carried the cross / of my shame”). But, this could still be a love song cast in religious tones.

The reason this works both ways is that the song is about what is lacking—about the missing piece we cannot find, the homecoming that we all yearn for. The overlapping of romantic and religious tones evokes an uncertainty in the singer, an ambiguity of desire, that taps into a universal human need—the desire for the ineffable, the undiscoverable, and the utterly necessary. In its disambiguated form, the song is about this ‘lack’, but that it can be taken in many ways contributes to its success as a piece of art.

(Perhaps this is also why these songs work so well in the bedroom. What else is lovemaking but an attempt to make up for a sense of absence, in postmodern jargon, to fill up the ‘lack’?)

Similarly, the third song in the sequence, “With or Without You” centers around an unidentified second-person. It seems that the “you” is a lover or friend, but the religious language imbues the song with doubt (“See the stone set in your eyes / See the thorn twist in your side / I wait for you”). The song, like the first three, is more about the speaker than his addressee. The ambiguity of the lyrics reflects an assumed ambivalence on the singer’s part: that he will persist without or without the addressee can be nothing more than a pose. By claiming as much, he points to his need.

These three songs are about absence and as such embrace with their language essential universals of faith and love—these themes can be combined in innumerable ways by the audience to the same effect. It is the absence of directed meaning and the essential invitation to inhabit the songs that makes them successful. The music supports this—its ambient openness, almost the sense of a clouded open plain, allows the lyrics to echo and hang while still pulsing as time moves along.

So, I ask you, brother, to listen to these songs again and see if I make any sense at all. Great poetry and art, I believe along with Empson, invites the creation of meaning through the deployment of different types of ambiguity. This universalizing type is part of what I think makes U2 successful. If I am right, I have solved a puzzle by setting up puzzles in its place. And, maybe, I have come to understand music a bit better. Or, maybe not. You be my judge.