Note: We take a break this weekend from political posts, apocalyptic visions, earthquakes, and Marriage Equality, to consider another personal passion (sports). Part 2 will be posted on Sunday.

People who aren’t from New England often don’t understand the peculiar madness and fierce loyalty that infects us—even those of us in exile—when it comes not just to our sports teams but to our sports figures. We live and breathe the Celtics, Bruins, Sox and Patriots (and hey, some people even pay attention to the Revolution); and we fall desperately in love with their leading figures and the unlikely heroes that sports seasons create. (Mark Bellhorn, anyone?)

I recently re-connected with some members of my high school band who started reading this blog—one of the nice and unexpected things about writing online. I do hope to write about what it was like to be in a band in the mid-90s and our experiences (and maybe they will join me), but I will have to save that for later.  Now I have to address their confusion and bemusement and reading my sister’s FB posts concerning my anxieties and exclamations over the Patriots.

In becoming reacquainted with me, my older friends have found something quite unexpected. They have found, over a decade later, that I too suffer from the affliction of near fanaticism, from the rabidity that plagues many a New England Sports fan. This comes as a surprise because I was a vocal and clear abstainer from high school athletics and a nonparticipant when it came to viewing sporting events.

Part of this has to do with the particular history of my time. I was raised by sports-loving mother on Garden Greens and Fenway Reds.  But this diet got harder to digest as I got older. I remember seeing the ball go through Buckner’s legs live. I watched Clemens go from rookie hero to maligned layabout with a bloated body and contract.

Love of the Celtics? No one within a day’s drive of Boston and who grew up in the 80s could deny the green and white. I remember the Big Three of back in the day. My favorite? Robert Parish. When Lenny Bias died of a cocaine overdose, it was a more effective anti-drug message than anything I learned in school or life. To this day if I hear the word cocaine I think of Lenny Bias, hearts exploding, and ruined dreams.

I had a nice almost John Mellencamp or ‘Footloose’ Youth

The Celtics fell off tragically for over a decade. The Red Sox swooned. And the Patriots were so long the laughingstock of the NFL that I could easily count more Cowboys, Bills and Giants gear in the halls of my high school. I checked out after 1986 emotionally. It was easy to spend my youth not getting upset.

So, now, for my bandmates and my wife (who herself has been perplexed by this transformation) I have another conversion story to tell you. How’d I go from giving away the Boston Globe sports page to following every Red Sox pitch on Gameday and  receiving from my sports-ignoring father the first football jersey I ever owned in my life?

This song was really, really big right around the time of the Lewinsky trial. Coincidence?

This story starts with politics. See, I used to be a political fanatic. This probably started when I worked in a bar in the summer of 1998 and watched the Monica Lewinsky fiasco unfold. I was both paralyzed and appalled by the political theater that kept real work from being done and that distracted us from growing inequalities and the occasional enforcement of no-fly zones with air raids.

In 2000, I was as passionately concerned about global warming and the future of our country as I could ever be about curve balls and pitch counts. In those halcyon days, we were debating about what to do with a government surplus. The election? So close that we didn’t know who the president would be for weeks. Then we learned about hanging fucking chads. And then the supreme court gave us an answer. (But not the one I was hoping for.)

Bright Eyes is scary good and just plain scary with this song.

The debate about the constitutionality and the policies that followed isn’t for me to consider. In fact, I was so thoroughly alienated by the outcome of the election and the transformation of our country that I checked out. I moved to NYC and worked in an office while I waited to start graduate school. This dislocation and alienation led me to an important discovery: I could stay involved with Boston news online. This is when I rediscovered the stats page.

And we didn’t see any ‘troubles’ ahead…

I had flirted with a return to loving baseball in 1999 when a brilliant, nearly superhuman Pedro Martinez willed the Red Sox into the playoffs. I remember asking the score of the playoff games in between songs while my band was playing. I had fallen in love with the rookie shortstop Nomar Garciaparra and his quirky OCD routines. Once in NYC, I could follow their exploits all the time and fill my need for news with the sporting world as I willfully shut out politics.

Then the planes hit the World Trade center and we walked out of a suddenly torn and changing city. I continued to live in NYC where I was consumed by news once again. But, as I found out quickly, I was out of step with the world. I was aghast when we invaded Afghanistan because I believed that going to war against terrorists legitimated them as an adversary when we should have been treating them like criminals and extra-legal brigands.

So I tuned out even more and into sports. But the Red Sox were just on the edge of being sold. They had some great pitchers I would learn to adore (Lowe, Wakefield, Pedro, and, yes, even the old Burkert) and a catcher who embodied (on the field) everything I loved about the sport (Varitek). The Red Sox were just about to take their fans on the wildest and most exhilarating two-year baseball tour that anyone has ever experienced.

But before that happened, somebody else came along.

When I was a kid, I was, as the father from Arrested Development would put it, just a turd on the field. I don’t think I ever had a hit during years of little league. I went to one day of football tryouts. And I actually dislocated my shoulder during a high school theater rehearsal. I wasn’t blessed with either physical gifts or the mental strength to make up for that.

This is not me, exactly.

But as I aged, I drifted in and out of gyms, getting steadily more serious about taking care of myself. By the time I left graduate school, I was playing basketball three hours a day. All that time in gyms forced me to socialize with guys who didn’t care about archaic poetry, obscure bands, or subtle political debates.

Guys in gyms talk about sports neurotically. In fact, one of my strongest memories from 2001 is being in in the weight room of a gym and talking to a guy who could bench over 400 pounds without a spotter. All he kept asking me was what sports I played in high school. I said none. He said that I looked like a runner. I said that I liked to run outside. He decided that I ran cross-country no matter how many times I denied it.

So, my new blastomorphic friend asked me what teams I rooted for. After I said the Red Sox, he asked, as if to confirm, if that meant I liked all New England teams. I said, of course. From that day on, I was the ‘Patriots Fan’. We used to work out on Sundays while games were showing and he would ask me about the Patriots’ coach Belichick and whether or not Bledsoe would throw for over 4000 yards and if the defense would hold up all season long. I would fake it.

But, as the saying goes, when you fake something for long enough, you start to become it. When Drew Bledsoe was knocked out of an early season game with a serious injury, I was pissed, but not incensed. (I never loved Bledsoe. Jay Cutler is Bledsoe 2.0: great arm; poor decision making. Although, Bledsoe is a far nicer guy.)

Not exactly designed by science to be the perfect QB. But still. 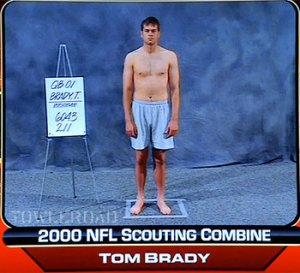 It was what happened next that changed me forever. Everyone who knows anything about football knows the legend of Tom Brady, the sixth round draft pick and skinny kid who couldn’t even remain a starter on his college team. I just happened to be around to watch him play those first few weeks as the Patriots inexplicably kept playing well and defied all expectations. I loved the team aesthetic, the drop-dead defense, and the eff-you to establishment talking heads.

See, Tom Brady appealed to where I was in life. He was unheralded and supposed to fail—which is exactly how I felt in graduate school. I had this crazy idea that if Tom Brady could do it, then, hey, so could I. So, I guess what I am saying is that I was inspired by his story, by the fact that pedigree doesn’t mean everything, and by the game-by-game assertion that you are what you do not what people say about what you’re supposed to do.

And I also learned to love football. When the Patriots went to the playoffs, I felt a personal connection to a team I had not felt since 1986 (Celtics and Red Sox). When they won through improbable and probably questionable events (the snow game and the tuck rule) I was glued to the TV. My wife was shocked at my sudden devotion and couldn’t understand where it came from.  I tried to tell her it was lying dormant for 15 years, but she didn’t believe me. To her (and the world I guess), I was a bandwagon fan.

When the Patriots won the Superbowl against conventional wisdom I was hooked. I used to joke with my sister that when I was depressed or uncertain, I would look in the mirror and just ask what Tom Brady would do. You know what he would do? He’d miss the playoffs in the next season but then win two Superbowls after that.

26 comments on “Growing Up and Growing Old With Tom Brady, Part 1”